1300 AD, Western Africa - the desire for goods such as ivory in Europe drives the development of many trade routes, with caravans of camels delivering goods across the desert landscape.

In Caravan, players position their camels to deliver goods where they are wanted. But, beware! Your rivals are interested in the same goods and are not above casting a greedy eye on your caravans ...

Place the game board in the middle of the table, in view and reach of all players. Each player chooses a color and takes a player board and five camels in that color.

Each player also takes one theft marker and places it on any of the matching spaces on their player board. All remaining camels and theft markers are returned to the game box.

Note: When learning the game, or for a more casual game, give each player a sixth camel. The rules otherwise remain the same.

If you would like a shorter game, or with 2 or 3 players, we recommend that you remove three each of white, red, blue, and brown goods cubes, and one each of gray, green, purple, and pink before pulling out the initial goods.

Place all the goods in the cloth bag and mix them. Randomly draw goods from the bag, placing one good on each of the eight numbered spaces on the board. Place one demand marker on each of the spaces: 1, 2, 7 and 8.

The last player to choose their color becomes the start player. Alternatively, a start player may be chosen at random.

The third player then takes three actions and so on until one player receives four actions. From that point forward, every player takes four actions during their turn.

Players choose from the following actions:

A player does not have to use all of their available actions. Any number of actions may be skipped by a player on their turn if desired.

In addition to taking actions, all players must watch to see when only four goods remain on the game board, so additional goods can be made available. (See Refill Goods on page 2).

Important: Camels carrying a good may not be moved. A camel may only carry at most one good at a time.

Pick up a Good

If a player has a camel which is not already carrying a good in a space where a good is available (i.e., not currently carried by another camel), the player may pick up the good and place it on their camel for one action.

If there are any demand markers in the space, the player takes those as well and puts them on the appropriate space of their player board.

Note: Once picked up, goods may not be dropped. Unless they are stolen, the only way to remove goods is to deliver them.

Important: A player may never pick up a good that would result in all of their camels carrying goods. That would leave the player with no possible actions.

If a player has a camel which is not already carrying a good in a space with another player's camel, which itself is carrying a good, that player may steal this good provided they have a theft marker.

To do so, the player gives a theft marker to the player they steal from, takes the good, and places it under their camel. This good is considered to be carried by the camel - but until it is moved, it may not be stolen again.

The player who received the theft marker places it on their player board on one of the available spots.

Note: Had the good originally been under another players camel, it could not have been stolen). A player who has no theft tokens may not steal a good.

Also, demand markers are never stolen. Once collected they remain on the player's board until the end of the game.


Move (and Deliver) A Good

This is the primary action of the game. Players take a good when they move it to the city matching the color of the good.

For example: Dan has his camels set up as follows:

Camel A is on Marrakesh. Camel D and camel E are carrying ivory (grey), which has a destination of Marrakesh. Since Camel A is not carrying a good, Dan can use one action to move the good from Camel D to Marrakesh, and deliver it.

As ivory is a rare good, it will be worth 6points at the end of the game. Dan cannot use one action to move the goodfrom Camel E, as diagonal movement is not allowed.

Note: If a player moves a good that was under a camel (due to having previously been stolen), place it on top of the camel to which it is moved.

Note: A good may move to any of your empty camels that are connected in a chain. It does not have to move all of the way to the appropriate city.

As soon as there are only 4 goods left on the board (not counting goods that are on or under camels), the game is interrupted. First, add one demand marker to each space containing the four remaining goods.

There may be more than one demand marker in a space. Then, from the bag, draw four new goods and place them, one at a time in numeric order on the numbered spaces without goods.

The end of the game is triggered when the final four goods are removed from the bag. The game ends immediately when the next good is delivered.

Players score their points as follows:


(To simplify scoring, it is recommended that players build piles with a value of 10 points, such as one rare good, one common good, and one demand marker).

After calculating scores, players who have too many goods picked up but not delivered are given a penalty. This includes goods there were stolen from another player and still under a camel.


The player with the highest score wins.

In case of a tie, the player among those tied who delivered more goods wins. If still tied, the tied players share the victory. 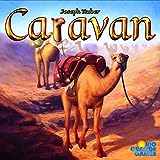