Can You Beat Ken? Game Rules First player spins the spinner and moves the game token the indicated number of spaces on the Game Path.

Note: Always move on arc paths in a clockwise direction.

The spinner card tells the player the number of spaces to move and the value of the spin (i.e. Regular, Double, Triple, Challenge 1-on-1, Challenge All). If the arrow points to "Regular", a correct answer is worth $100,000.

The player to the right of the spinning player (Reader) takes the top card off the stack and reads out loud the question indicated by the colored dot under the game token.

When the Spinner Points to "double"

When a Spinner Points to "triple"


When a Spinner Points to "challenge 1-on-1"


When the Spinner Points to "challenge All"

The spinning Player challenges all players. This challenge cannot be refused.

Ken is last to get a "turn". Any player may spin for him. If the spinner points to Regular, Double, or Triple- play is as usual.

If the spinner points to Challenge 1-on-1 or Challenge All- every player is included in the challenge round and Ken automatically wagers three spaces ($300,000). The rules outlined in #6 for "Challenge All" turns are applied.

"Can you beat Ken?" Spaces

When a player lands on a game space with a star-shaped dot, this is automatically a "Challenge Ken" question. Player determines the wager in a head-to-head challenge with Ken.

If the player lands on a "Can you Beat Ken?" space with a Challenge 1-on-1 or Challenge All spin, every player is automatically included in the challenge. The spinning Player determines the wager.

When Ken lands on the "Can you Beat Ken?" space, it's a "Challenge All" round, the wager is worth three spaces and challenge rules apply, including winning players receiving a $100K bonus when beating Ken.

When a player lands on a space at a point where the background matches his/her Money Track color, s/he immediately receives a bonus of $300,000 (three spaces on his/her money Track).

The Player's turn continues in normal fashion with the value dictated by the spinner.

No player can win on someone else's turn (including Ken). Players must wait until it is their turn to advance to $2.6M-whether on a Regular value or Challenge round.

When a player (including Ken) has a chance to win on his/her turn-whether with a Regular or Challenge round-the player with the least winnings draws the top card and chooses any question to pose to the potential winner.

If the potential winner correctly answers the question, s/he moves into the $2.6 M Winner's Circle" and the game is over.

Note: To provide players with a decent chance of beating the all-time TV trivia champ in the world, we handicapped Ken Jennings. 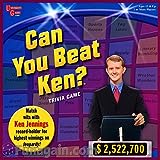 Can You Beat Ken?

Can You Beat Ken?