In this cooperative game, everyone works in cahoots to complete a series of goal cards. Each goal card states a specific requirement that needs to be showing on the four face up piles of number cards.

Take turns playing cards to one of the four piles, which must either share the same color or same number as the top card on the pile. As an added challenge, you are limited in what information you can share with your teammates! Get through all the goal cards to win.

The game starts with the player who last ate something orange and continues to the left. On your turn, play one card from your hand onto one of the four number card piles.

The card you play must either be the same color or the same number as the card that is on top of the pile. (It can also be both). Then draw back up to four number cards, if there are still cards in the deck.

If the card you placed completes any of the visible goals, immediately collect all related goal cards and place them in your wins pile. Then replace them with cards from the goal pile so that there are four visible goals.

If your card does not complete any goals, the next player takes a turn.

It's possible that multiple goal cards may be completed on a turn or that a goal card is completed by the face up number cards as soon as it is revealed. In these cases, collect any completed goal cards and replace them with new goals from the pile.

Goal cards that list one or more colors must have at least one named color in play in order to be completed.

You may look through the face-up piles at any time to see what numbers have been played.

As you try to achieve the goals, your team is restricted in what you can say during the game. In particular, you are not allowed to state what numbers or colors you have in your hand.

The only communication allowed is which piles you would like to play onto, or which goal cards you think your team should go for next.

Examples of things you can say:

Continue taking turns playing number cards until one of the following happens:

You complete all of the goal cards. Congratulations! You worked in cahoots and beat the game. Time to step up the challenge with a more difficult level!

Your team was defeated by the game. Reshuffle the cards and try again!

Set a timer for 4 minutes. Try to complete all goal cards before time runs out. Ignore the turn order, so players can play cards when they would like, out of order.

For an added challenge play without any verbal communication whatsoever.

When playing with younger players, you may ease the communication restrictions. Also try playing with "open hands". 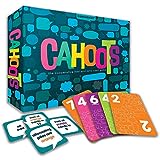