CaCao: Diamante contains 4 expansion modules that can be integrated individually or in any combination into the CaCao base game. In addition, these new modules can be combined with the modules from CaCao: chocolate in any way you desire.

Remove the five temples and return them to the box. Add the five gem mines and shuffle the Jungle draw pile.

Sort the seven mask tiles by their values and lay them out as a supply.

Return the mask with a value of 12 to the box. Then, return eight gems to the box (two of each color) before placing them into the mine cart.

When a gem mine tile is placed in the jungle display (or on the map board if you are playing with the Map Module from Cacao: Chocolatl), take the mine cart and shake out six gems through the hole, one after another.

Attention: If you shake out more than six gems, randomly return any excess gems back to the mine cart until you have exactly six.

For each of your activated workers on the adjacent edge of the gem mine, take 1 gem of your choice from this gem mine. Place the gems next to your village board.

As soon as you have at least one gem in each of the four colors, you must immediately exchange this set of four gems for the lowest-value mask in the supply. When you take a mask from the supply, place it in front of you next to your gold. Return the exchanged gems to the box.

Note: When you place a gem mine, actions are not resolved simultaneously. Instead, fully resolve the gem mine and all of your other actions. Then, in clockwise order, each other player resolves all of his or her actions.

Add the values of any masks in front of you to your total gold.

For each gem that you still own at the end of the game, you get 1 gold from the bank.


The Tree Of Life

Remove the three gold mines and return them to the box. Add the three Trees of Life and shuffle the Jungle draw pile.

When playing with four players (when also using the Chocolate module), each player removes one 1-1-1-1 worker tile and returns it to the box.

When playing with two players (when using the Chocolate module), add two Trees of Life and shuffle the Jungle draw pile. Shuffle your 0-0-0-4 worker tile from the New Workers Module of this expansion in with your worker tiles from the base game.

For each of your activated workers on the adjacent edge of the tile, you get 1 gold from the bank.

If your worker tile has 0 workers on the adjacent edge of the tile, you get 3 gold from the bank.

The Favor of the Emperor

Place the Emperor on the market with a selling price of 2. If you are playing with the Irrigation module from Cacao: Chocolatl, the Emperor starts on the irrigation tile instead.

When you place one of your worker tiles somewhere in the same row or column as the Emperor, move the Emperor onto the worker tile you just placed (skipping tiles and gaps in between). Then you get 1 gold from the bank.

When you start a turn with the Emperor on one of your worker tiles, you get 1 gold from the bank.

During setup, players can use the new worker tiles to create a custom set of worker tiles in one of two ways:


Note: When playing with the new workers, each player must use the same number and combination of tiles.

If you create a larger set, make sure to maintain the balance of jungle tiles and worker tiles. There should be fewer jungle tiles than the total number of worker tiles (among all players).

Depending on the number of players (and the overbuilding options you want), consider the following ranges:

Gigantic Variant for 3 or 4 Players

For a special play experience, consider combining all the modules from CaCao: ChoColatl and CaCao: Diamante with all the base game components to create one gigantic game.

When playing with four players, use all 60 worker tiles and all 45 jungle tiles.

When playing with three players, remove the following jungle tiles: 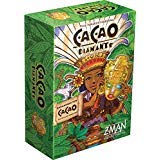 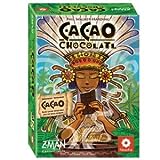