The first player to get rid of all his cards wins.

Return any left-over cards to the box. Each player places his cards in a face-down stack in front of himself, without looking at them. Then each picks up the first five cards from his stack.

The players choose a starting player. BY GOLLY is played n clockwise order. The player whose turn it is places an animal card from his hand face up in front of himself, and then turns over one of the chicken run cards.

If the two cards do not match each other, the player must take the animal card back into his hand and turn the chicken run card back face down. The next player now takes his turn.

If the two cards do match, however, the player places his matching animal card to one side and continues with his turn. The chicken run card that he turned over remains face-up. He continues in this way until he turns over two cards that do not match or he runs out of cards in his hand.


Lucky duck: if the player has more than one copy of a card in his hand, he may discard all these cards when he manages to turn over the matching chicken run card.

Any chicken run cards that he has turned over, remain face up until the end of his turn when they are all turned back face down and the player draws sufficient cards from the stack in front of himself to take his hand back up to 5 cards (if possible).

When grabbing things from a chicken run. a player can grab a claw fall of chicken poo!

Two of the chicken ran cards show a pile of chicken mess. When a player turns over one of these, he needs to find a shovel quickly. so that he can bury it immediately!

When a player turns over one of these chicken poo cards, he must immediately turn over a second chicken run card.


There are three possible results

The game ends as soon as a player discards his last animal cards. That player is the winner. 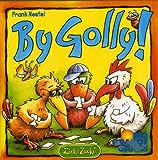