Players spin the spinner to move around the game board, collecting the Tool Belt and all of the tools of the player's color (hammer, screwdriver, wrench, bolt, nut). Players try to avoid wearing the Sore Thumb.

Note: The tools really work. Use the screwdriver or the wrench to put together or take apart the nut and bolt.

Each player chooses a colored bolt (mover) which will be the same color as the tools the player attempts to collect while moving around the game board.

All colored bolts (movers) begin on the "Start" spot.

The youngest player goes first by spinning the spinner and moving his/her colored half-size bolt (mover) counterclockwise around the board the number of spaces indicated by the spin.

Players follow the directions for the space landed on. Then the player's turn is over.

The player takes the tool of the same color as his/her mover from the tool box (game box). If the piece has already been collected, then the player's turn is over.

Note: Once the nut and bolt are collected, the Busy, Busy Builders should put them together (screw the nut onto the bolt). It will be easier to store in the Tool Belt that way.

Take the Tool Belt from the game box or from the player who is wearing it. If some tools have already been collected, put those tools in the Tool Belt loops.

Ouch! The player takes the Sore Thumb from the game box or from another player who is wearing it and places it on his/her thumb.

A player may get rid of the Sore Thumb in one of the following ways:

The player must return either the Sore Thumb or one of his/her tools or the Tool Belt to the game box. If the player has nothing to return, the turn is over.

The player takes one tool of his/her color from the game box or the Tool Belt from the player who is wearing it.

If a player lands on the "Start" space, that player can either treat it like the "Take 1" space or return the Sore Thumb to the game box.

The first player to collect all the tools of his/her color (hammer, screwdriver, wrench, bolt, nut) and the Tool Belt - while NOT wearing the Sore Thumb - is the winner - the Busy, Busy Builder! 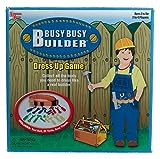