Earn points by causing the next player to topple the tower. The first player to acquire 30 points wins.

The youngest player takes the starter card (has stars on it). Shuffle all remaining cards, place them facedown on the table to create a draw pile. Each player draws 3 cards.

The player with the starter card goes first and chooses a block card from their hand to play.

Place the card face up next to the draw pile to form the points pile. Then place the matching block in the center of the table to start the tower. Finally, draw a new card.

Players take turns adding blocks to the tower in the same way. Turn order follows the direction the arrow on the starter card is pointing.

Only the first block can touch the table and a new block is only allowed to touch the last two blocks added to the tower.


When the Blocks Fall

If any block other than the first falls and touches the table, then the tower has "toppled".

Whoever last placed a block succesfully picks up all the cards from the points pile, including the card for the block that toppled the tower, and adds up all the point values of the cards, scoring that many points.

If a player has accumulated a total of 30 points, the game ends and that player wins. Otherwise, a new round begins with a new tower.

Pass the starter card to the left and flip it over so that the turn order reverses direction each round. All cards are reshuffled and placed in the draw pile.

Keep track of individual scores across all rounds.

You can use two hands, but cannot touch the tower. After placing your block card you can pick-up and move the block as much as needed, but cannot change your card.

A block counts as successfully placed once the next player plays a card.

Towers with less than 4 blocks are worth 0 points. If the draw pile is empty and you have no block cards in your hand on your turn, the round ends and everyone splits the points evenly (ignore any remainder).

The blocks are allowed to shift without falling.

You may play one action card per turn. Discard the card and take the associated action described on below.

After playing an action card, you must still play a block card from your hand. Draw two cards at the end of your turn.

If you topple the tower while taking an action, the points still go to the previous player.

If you ever have two action cards, you may shuffle your hand into the draw pile, draw three new cards and continue your turn.

You may pick up and rearrange the last block added to the tower, following normal placement rules.

The block you play this turn can touch any block in the tower, not just the last two.

You may remove the last block added to the tower. Place the removed block's card at the bottom of the draw pile.

Swap cards with another player. Give them two cards and randomly take two.

If you can only give one card, only take one card. If you receive a new action card, you can play it this turn (in which case, draw 3 cards at the end of your turn). 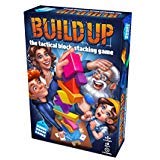