Line Up 4 to claim the Wall!

X's and O's are taken to a whole new dimension in this one of a kind strategy game. Players build a wall of bricks by placing their pieces on top of each other.

The first player to align four of their symbol or color in a row wins the game and claims the wall!

But watch out! Each brick contains both your symbol and color as well as those of your opponent. So each time you add a new piece, you risk helping your opponent win the game!

Brix is quick to learn, and different each time you play. This strategy game is sure to become your family's favorite!

All 22 bricks are placed in the center of the table to form a draw pile within reach of both players.

The first player starts building the wall by taking one of the bricks from the center and placing it between both players (either horizontally or vertically).

In turn, each player adds one new brick to the wall, placing it either vertically or horizontally.

Each new brick must lie flat, and in line with any other previously played bricks. (A new brick cannot be placed at an angle or extend past other bricks so that part of it hovers in the air).

Important: The wall can never be more than 8 symbols wide.

If nobody has won by the time all 22 bricks have been added to the wall, then players continue the game by removing bricks from the wall and returning them to a new location on the wall.

Players will need to be careful that the structure does not collapse, because if the wall falls over on your turn, you lose the game.

Important: You cannot move a brick that your opponent moved on his last turn.

The first player to align four of their symbol or color in a row wins the game and claims the wall!

Note: If you place a brick on your turn that would make both players win, you are the player who wins the game. 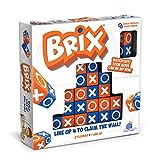