There are some more wacky ways to play Boxers or Briefs. Variations are played exactly the same as the standard rules with the rules changes listed below each variation.

Play until a player collects a combination of 8 scoring tokens (TRUE or FUNNY).

Play until a player collects a combination of 4 scoring tokens (TRUE or FUNNY). You may want to play this variation In a game that Indudes B players.

The reader thinks of a famous person and, before die other players select cards, announces everyone will be talking about that person during this round. When reading the cards submitted, the reader must say: I am (famous person) and I...

Then the reader picks the most true and the most funny as if he or die were that famous person, create Underwear

This is a good way to get your blank cards filled out. At the start of the game, deal out all 20 blank cards and give each player a pencil. It doesn't matter if some players have more cards.

All players neatly fill in their blank cards. Collect the cards, shuffle them and then re-deal them to all players. Players draw additional cards until each person has 7 cards.

The reader then rolls the die and aH other players write their own sentence for the category roBed. For example, if my mom roled f am, and I know she breeds cats, I could write I am constantly covemi In fur to try to get a TRUE scoring token.

The player to the left of the reader collects all the submissions for that round, shuffles them and reads them aloud in the following way: My name b (the reader's name) and I... The reader then picks a TRUE and a FUNNY statement and awards scoring tokens as described in regular gameplay.

If two submissions are the same and they are selected as either true or fanny, both players receive a scoring token. For the next rounds, you may reuse the same pieces of paper by simply crossing out previous submissions.


That's not my Underwear

After the reader colects the cards, he or she draws 2 random cards and throws them into the met. If the reader selects one of the random cards (no one claims it as theirs), no one receives scoring tokens for that selection. 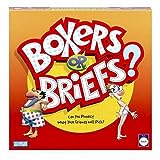