Each player controls a species of tree thriving in the beautiful terrain of a national park.

Players grow their trees in the spring and score points for having the most majestic trees along each trail (row/column) in the summer. In the autumn, the wind blows and players cover the ground in leaves.

When winter comes, players score points for having the most coverage in each region. The highest-scoring player at the end of the year is the winner.

Tip: One suggestion is whoever has most recently visited a national park.

Setup is very similar at 2, 3, and 4 players; however, the play area is smaller for fewer players.

There are no other differences by player count.

A year in a national park

Each game of Bosk is played over the course of one year, with two playing seasons (spring and autumn) and two scoring seasons (summer and winter).

In the spring, players grow their trees one by one at the trail intersections between varying types of terrain. Players earn points in the summer for having the highest total value in each trail.


Tip: Effective tree placement is key to victory! Each tree's value influences scoring in the summer, and its position influences leaf placement options in the autumn.


Note: Water terrain squares are treated the same as all other squares.

In the summer, visitors travel the trails through the park, admiring the park and rewarding the player with the most majestic trees. Points are awarded for each trail on the Park Board.


Note: Look to the values on the trees, not the count of trees in the row/column.

Note: The hiker can be used to help track which row/column is being scored.

Note: Do Not Move Or Remove The Trees As The Values Are Totaled.

As each player earns points, move their Score Marker along the Score Track.

After scoring, compare all players' total points. The player with the fewest points will become the Start Player for autumn. Ties are broken clockwise from the previous Start Player.

Give the Hiker to the new Start Player.

In the autumn, the wind blows and leaves fall from the trees, covering the terrain. Leaves will form paths in the direction of the wind, players will earn points in the winter for covering the most terrain in each region.

The new Start Player will select the initial direction of the wind.

Players will take turns blowing leaves from their trees to cover Terrain Squares. The current spot on the Wind Board indicates both which tree will lose its leaves and the direction the leaves will blow in.

Leaves fall in a continuous path in the direction of the wind, giving players control of the terrain as they go. Players may cover other players' leaves in their path, but it comes with a cost. To place leaves, a player must:

Leaves cannot be placed outside the play area.

In a 3-player game, the edge of the play area is indicated by a glowing white border.

Covering leaves that are already on a terrain tile is described below.

Placing leaves on the water terrain squares is the same as any other tile.

While most leaves fall on empty terrain, a player may cover another player's leaves in their path. Only the leaves on top will count toward scoring in winter.

To cover a pile where their own leaf is on top, players play as if the terrain tile is empty (no additional cost). To cover another player's Leaf Token along their path, a player must:

Instead of blowing leaves, players may call a squirrel to their aid. When a player selects their Leaf Tile with a squirrel icon, they must:

Once each player has taken a turn, the wind will change before gameplay continues.

Reminder: Each Player Should Have Removed One Of Their Trees From The Terrain Board.

Note: The squirrel icon counts as a value of 1.

Now that the trees are bare, players will score for covering the most ground for each type of terrain. As players earn points, move their Score Markers along the Score Track, adding to the points gained in the summer.

The 8 regions are formed by Terrain Squares of the same type (by color and texture). For each region:

After winter scoring, compare each players' total points. The highest-scoring player is the winner!

Ties are broken by the player closest to the final round start player. 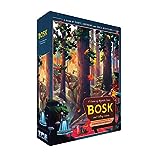