To keep up with Bop it. Bop it tells you to do these five things... at random!

Each button also has an extra function:

Object: To keep up with Bop it Download and get the highest score. Play

alone and go for a personal best, or take turns and see who can score highest.

Play: Hit either BOP IT button to start the game. Respond in time to the commands you hear. Score 1 point each time you get it right, but if you're too slow, or get it wrong, the game will end. Listen up for your score.

As you score more points the game will get harder! See the Challenge Levels table for details.

For 2 or more players. Face each other or stand in a circle.

Object: To keep up with Bop it Download and be the last player left in the game .

Play: Choose a player to go first. Hit either BOP IT button to start the game. Respond in time to the commands you hear. When you hear "Pass it!" hand Bop it Download to the player on your left.

If you're too slow or get it wrong, Bop it Download will 'scream' and stop.

Sorry, you're out of the game! The player to your left continues the game by hitting either BOP IT button.

Winning: The last player left in the game must play a final sequence.

As you play, the game will get harder! See the Challenge Levels table for details.

For 2 or more players.

Object: To keep up with Bop it Download and be the first player to score 5 points or be the last player left in the game.

Respond to the commands that apply to your handle only - You CAN'T reach across to the other player's side.

When you hear "Bop it!", race to hit the BOP IT button that matches your color first. If you do this, you score 1 point.

If you're too slow, or get it wrong, you're out of the game and the other player wins.

Winning: You win if the other player messes up a command or if you are the first to score 5 points. Bop it Download tells you who has won.

Playback lets you play sounds or music stored on your Bop it Download.

After selecting PLAYBACK , hit any button, except PULL IT to play back sounds you have downloaded Playback from the Bop it website . Hit another button to stop Playback.

In SOLO and PASS IT you unlock new sounds as you score more points. At level 1 you only have to BOP IT, PULL IT or TWIST IT. At higher levels you get more commands which can be sounds or lights instead of words.

Compete To Your Own Beat

For an awesome party experience, plug Bop it Download into your home stereo or computer speakers.

Turn the volume to 'low' with the SPIN IT wheel, then plug the audio cable into the headphone jack. Set all volume levels at their lowest - then crank it up when you hear the sounds and get the party started!

During a PASS IT game, players should move around the game instead of passing it to avoid tangling the audio cable.

If you want to play without waking up the neighbours, try playing with headphones. Turn the volume to 'low' with the SPIN IT wheel then plug your headphones into the jack located next to the TWIST IT handle.

You may need to buy an adapter if the headphone plug does not fit into the jack. Be careful to avoid the wire and be mindful of your surroundings as you play!

You can get new sounds and music for your

If you are under 18, get your parents' permission before downloading this free program.

The program also lets you record your own commands and voice responses. 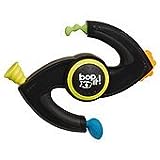 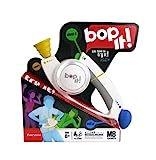 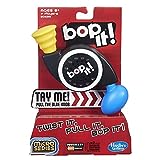