There's gold in them hills! With that cry prospectors race westward and Boomtowns are established-the gold rush is on.

In Boomtown, you must compete with your fellow prospectors in a mad scramble to find your fortune in gold, but watch out for highwaymen, card sharks and crooked politicians. There are many ways to make a buck in Boomtown.

The players are prospectors, trying to find gold and get rich. Every turn, mining concessions are auctioned. Then gold is found on some, depending on the die rolls.

Players can also act as highwaymen, tavern owners, and politicians. Through many means are fortunes won. At the end of the game, the player with the most influence, the best mines and the most gold wins.

Each player starts the game with 10 gold (in poker chips). The bank makes change when necessary.

All cards are shuffled and placed in a pile, face down, on the table. This is the drawing deck. Note: in a 3 player game, you can remove 15 cards randomly from the drawing deck, without looking at them, for a shorter game.

The two dice, the banks poker chips, the town tokens and the mayor pawns are placed near the drawing deck.

The first turn can start.

Draw as many cards as there are players from the drawing deck and place them in a row, face up, on the table.

Note: on the first turn, all cards revealed must be mining concessions. If you draw some other cards, place them back in the deck, replace them with the first mines you draw, and reshuffle the deck.

A player who passed is out of the auction and cannot enter it again. The bidding goes on until all players save one have passed. A player may not bid more gold than he possesses.

Note: In the very unlikely case of all players passing, the first player, who was the first to pass, is considered the highest bidder.

With four or five players

That player then keeps half of the money he received, (also rounded up) and gives the rest to his right neighbor, and so on. This goes on until there is nothing left to give to the player on the right.

Note: the highest bidder may never get back some of the money he paid. Therefore, if his left neighbor receives two or more gold, he keeps everything he has been given.

The highest bidder chooses one of the cards on sale. If it is a mine, he places it, face up, in front of him. If it is an event card, special rules apply (see Events, below).

Once the highest bidder has chosen a card, the player on his left must choose one of the remaining cards. The choice continues to pass leftward until each player has taken one card.

If a player takes a mining concession in a town whose mayor (see Mayors, below) is another player, he must pay to the mayor as much gold as the mayor has mines in this town.

Once all the cards have been taken, the first player rolls the two dice.

Every mining concession whose production die equals the sum of the two dice rolled produces gold. The owner of the concession receives gold from the bank equal to the mines production value (number of gold pieces on the card).

Having done this the turn ends and the next turn can start.

Note that some mines have different card art and indicate that they are dangerous. On a production roll of 2 or 12 these mines collapse and are removed from the game.

Each player must keep all his mines face up, in clear view of all other players. Mines should be grouped by town - each town is color coded for convenience (Cactus Junction = green, Cold Mountain = purple, Coyote City = red, Dry Gulch = yellow, and San Narciso = blue).

The first player who owns two mines in the same town becomes the mayor of this town, and takes the corresponding mayor pawn (i.e. of the same color).

From now on, every time a player takes a mine in a town with a mayor, he must pay to the controlling player a fee equal to the number of mines the mayor owns in this same town.

If, at any time, a player has more mines in a town than the current mayor, no matter whether after normally taking a card on auction or after an event, this player becomes the new mayor and takes the mayor pawn from the former mayor.

If a player becomes the new mayor by taking a mine, he must still pay the former mayor prior to taking the mayor pawn.

Most events have an instant effect and are discarded afterwards. Some however, (Saloon, Saloon Girls, Governor, New Vein) are placed along with the mines and have a lasting effect. Others (The Telegraph and Mustang) must be kept by the player and may be used later in the game.

It can happen that a player has to choose a card that he cannot use-the Governor if he has no Mayor, or the Girls if he has no Saloon.

In this case, the player keeps the card in front of him - it has no effect until the player becomes Mayor of a town or takes a Saloon card.

Play immediately. Each other player must pay the bank 4 gold. This card must be played immediately and is then discarded.

An opponent's mine or saloon of your choice explodes and is removed from the game.

This card must be played immediately and is then discarded.

Take a mine of your choice from another player. You can only take a mine in a town where you already have a concession.

If the town has a mayor, you must still make payment. This card must be played immediately and is then discarded.

Place one of your mayor pawns on this card. This mayor is now governor. As long as this pawn is governor, the price that other players pay you when taking a mine in this town is doubled.

If another player takes control of this mayor pawn, Governor is discarded.

Choose a player and a number between 2 and 12 - the sum you are trying to steal. Roll the dice. If you roll this number or greater, you have robbed that player that amount of gold.

If you roll less, the holdup fails and this card has no effect. This card must be played immediately and is then discarded.

Keep this card and use it later to choose your card immediately after the first player (the high bidder), instead of your normal clockwise turn. Turn order then returns to normal. Once used, this card is discarded.

Place this card under one of your mines. From now on, the production value of this mine is increased by 3 gold. If this mine is dynamited or expropriated, the new vein goes with it. If placed upon a dangerous mine that later collapses, this card is discarded.

Place this card in front of you with your mines and place a wooden town token of your choice upon it.

From now on, each time a mine in the chosen town produces gold, its owner must pay you 2 gold that he spends in your saloon.

Place this card with one of your saloons. From now on, each time a mine in the saloon's town produces gold, its owner must pay you 4 gold instead of 2.

If the saloon is dynamited, this card is discarded.

You receive 10 gold from the bank. This card must be played immediately and is then discarded.

Keep this card and use it when you want. Following any one production dice roll, you may change the result of one of the two dice. This card is then discarded.

If for any reason (payment to a mayor, an event card) you are required to pay more gold than you actually possess you must pay what you can. The player receiving the money receives no additional compensation. A player who is out of money is bankrupt and cannot bid on new mines until they have the gold to do so.

The game ends when the drawing deck is exhausted and exhausted.

Once the last production roll is made, each player then reckons his score. A player's score is calculated as follows: 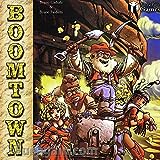