You are an FBI agent competing against other agents to see who can catch Bonnie and Clyde. Th e object of the game is to be the fi rst to score 100 or more points.

There are two types of cards used in this game: Evidence (Location) cards and the Ted Hinton card. The game is played like the classic Rummy card game, with players playing melds and layoffs of Evidence cards to score points.

The Ted Hinton card adds a strategic element to the game not found in traditional Rummy. After each hand, you total your points, and if no one has 100 or more points, you play another hand.

Play proceeds clockwise, starting with the player to the dealer's left. Each player completes the following steps, in order, before the next player's turn begins.

Each step of the turn is described in detail below:

You may play Ted Hinton or Evidence in any order:

Ted Hinton: You may play at most one Ted Hinton card per turn. This card allows you to do your choice of any one of 3 things.

When you are done doing the action you have chosen, put the Ted Hinton card in the discard pile. This is not the discard that ends your turn.

You can play Evidence cards by themselves if they match a meld that is already face up in front of any player (including you). This is called a layoff.

If you have two of the same Location card, you can lay them off one at a time (which counts as two layoffs), or both at once (which counts as one layoff) - your choice. If you layoff two different Locations in a single turn, each one counts as a separate layoff.

Playing a meld or layoff of the Location the Crime Spree Car is on.

Once you have placed the meld or layoff, you must do both of the following:


Playing a meld or layoff of a Location the Crime Spree Car is not on:

Once you have placed the meld or layoff, you must do both of the following:

After you have played all the cards you want to, you must discard any one card face up on the top of the FBI Files. This ends your turn.

Play continues in a clockwise direction around the table until the hand ends.

A hand can end in one of two ways: when any player discards their last card, or when the last card of the Case File is drawn.

In the latter case, the player whose turn it is finishes playing any cards they can, discarding normally, and then the hand ends. Th e hand is then scored.

Bonus: The player who ends the hand earns bonus points equal to the position where the Crime Spree Car is when the hand ends.

Shut Out: If you ended the hand and you have both Bonnie and Clyde cards in front of you, you have captured them! Congratulations , you score normally, but all other players score 0 points for that hand.

Also play another hand if no player has 100 points or more. Begin each new hand with a new Setup.

Do not forget to shuffle in all the unrevealed Locations on the board from the previous hand, and to reposition the Crime Spree Car on Kaufman, Texas.

For a longer game, play until one player has scored over 200 points. 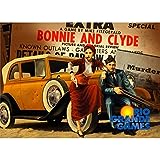