Players take the role of merchants. Riding upon elephants, they travel around Bombay building palaces, buying silk from trading posts and selling it in cities. At the end of the game the richest player is the winner.

Note: these rules are for the 4-player game. Please see the last page for the necessary adjustments to play with 2, 3 and 5 players.

A game of Bombay for 4 players consists of 4 sets. A set is made up of a Restock, and then 4 game turns. During each game turn, the players may make 3 actions successively, beginning with the first player.

The first player picks up the bag and takes out 9 silk bales. Then they separate the bales by color, and place them into the Markets:

Note: Markets do not all have to be stocked. It is possible that certain colors will not be drawn from the bag. These colors will therefore not be available to buy until the next Restock (see 'Trading Post closed').

Example: the first player picks out 3 orange bales, 2 blue bales, 2 purple bales and 2 yellow bales. He puts the orange bales in the left- hand Market, and the others in the central Market. The right-hand Market remains empty.

If, during the course of the game (following a Restock or a purchase), a color of silk bale is not available from the Markets, you should turn over the 2 Trading Post tokens of that color to the 'closed' position to show that it is no longer possible to buy that color bale until the next Restock.

The first player places one Action token by the board. Each player may take, on their turn, 3 actions. In the game, one action is symbolized by one star. Moving clockwise and starting with the first player, each player spends their 3 actions.

A player may spend less than 3 actions if they wish (actions that are not used are discarded). Players make take their actions in any order and may do the same action twice (for example 2 movements), but they can only buy one bale per game turn.

A. Consolidate your Fortune

A player spends all 3 actions and takes 1 rupee from the bank.


B. Move your Elephant

The player moves their elephant from one site to an adjacent site, following a trail. The cost of movement depends upon where the elephant finishes:

Note: more than one elephant may occupy the same site. Bridges, the desert and the river do not hinder an elephant's progress, but they may only travel along a marked trail.


The player places the bale on his elephant. Each elephant may only transport 2 bales and it is not possible to buy a bale if an elephant's basket is already full.

Remember: a player may make only one purchase per turn!

Example: Grey moves his elephant from the hilltop to a purple Trading Post. This costs 1 action...

Grey buys 1 purple bale. He takes 1 bale from the Market and, because it is the central Market, it costs him 1 rupee and 2 actions. Grey has now spent his 3 actions and it is the next player's turn.

D. Sell one silk bale in a city

A player whose elephant is in a city may sell 1 silk bale by spending 1 action. The color of the silk bale must match the color of one of the 3 Demands of that city.

Example: Brown is in the city of Bombay. He decides to sell 1 purple bale (costing him 1 action). He places the bale back in the bag and takes 3 rupees (purple is in the central Market) plus a Client token (the bonus for selling a purple bale)...

Brown changes Bombay's Demands. The purple Demand cube is moved to the bottom of the scale and the orange Demand cube, which was at the bottom, moves up one place. Finally, Brown takes a City token from Bombay, because he does not already have one.

A player whose elephant is on a site with no buildings on it (no Trading Post, city or palace), may build 1 palace by spending 1 action and 1 silk bale of any color from his elephant (the bale is put back into the bag).

He may then place one of his palaces on the site. Also, if the site contains a Palace token, he takes it and applies its effects (see 'Palace tokens').

Note: entering one of your own palaces does not earn you any rupees.

Example: Pink is on a site where he could build a palace. He spends 1 action and 1 silk bale and places his palace there.

If the first player has no more Action tokens, the set is finished.


End of the Set

The player to the left of the first player becomes the new first player for the new set. He takes the 4 Action tokens.

He gathers up all the bales from the Markets and puts them back in the bag. He puts the Trading Post tokens so that 'Open' is face up.

A new set begins (Restock + 4 game turns). When each player has been the first player once (after four sets), the game is over.


The player with the most money (of course including money earned over the course of the game) is the winner.

In case of a draw, whichever player (of those who are equal) with the most Client tokens is declared the winner.

Last place gets nothing.

Note: money earned from City tokens is the same regardless of the number of players. 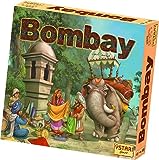