Blurble is your chance to participate in hilarious races involving something we do every day - talk!

To Score points, be the first to say a word that starts with the same letter as the image on a card. It sounds easy, but be careful not to trip on your tongue as you try to get the word out!

Choose a player to be the first Blurbler. Hand this player a stack of cards face-down.


Role of the Referee

All players not participating in a race are Referees.

Referees vote on the following if necessary:

To start a new race, the Blurbier places the stack between themselves and the next player clockwise around the table and begins again at Step 2. This continues until the Blurbier has raced each player at the table.

Once the Blurbler has raced each player, the player to the Blurbler's left becomes the new Blurbler. Begin the next round at Step 1.

The player with the most points at the end of the game wins! If the game ends in a tie, the youngest player wins.

Here are 2 suggestions that can help put younger players on equal footing with older players. Choose the one that works best for you.

Older players have to abide by the restrictions on legal words, but younger players do not. Younger players can win a race with an illegal word, as long as the word starts with the same first letter as the image on the card.

Require younger players to follow the standard rules, but further limit the criteria for legal words that older players can use. 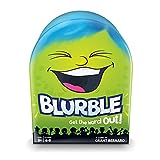 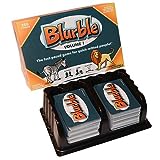