Do your best to match the answer of exactly one other player to finish the Word Cues, and gain points:

Once a player has reached 25 points, they win!

How to fill in the Blanks

There are just a few small guidelines for what counts as acceptable answers for Word Cues:

Once a player has reached 25 points, they win! 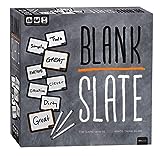