You command a flotilla of ships on behalf of a nation in a far off corner of the Caribbean. Each turn, you will move your merchant ship, your pirate ship, and a navy ship to try and win doubloons.

These riches will allow you to improve your ships and when your fleet is fully developed, you may pay the ransom of the governor's daughter to win the game.

Place the board in the middle of the table. Place the two navy ships in their starting areas and the goods in the appropriate ports.

The object of the game is to flip your victory card face-up by paying 10 doubloons.

The first player plays his turn, and then play continues clockwise. On your turn, you must resolve the following steps in this exact order:

The first thing to do is to choose one of your movement cards. The movement cards show four lines of information. We'll only consider the first three for now (the last one is used at the end of the turn).

Each of these lines represents a type of ship and. a numbered, value which indicates the corresponding movement capacity.

Once you have played your movement card, it's time to move your ships.

You can also move one of the navy ships (the one shown on the card you've just played). Each ship can move a number of spaces ofyour choice, less than or equal to the value given on the line corresponding to it on the movement card.

Ships can only move on sea spaces. They can move through friendly ships, but not through those belonging to opponents.

Friendly ships are: your pirate,your merchant and the navy ship(s) you can move on your turn. A ship can never end its movement on the same space as another ship.

A ship can only perform A SINGLE ACTION on its turn.

Important: you may move your ships in an order of your choice, which is not necessarily the order indicated by the movement card. Each ship movement must be completed before starting to move the next ship.

The role of the navy ship is to sink the pirates.

Before, during, or after its movement, the navy ship you are moving can attack an adjacent opposing pirate. That ship is sunk and returned to its owner. You win 2 doubloons. If it was carrying a goods cube, the cube is returned to the stock of the port of its color.

Attacking is an action.

The role of the merchant is to transport goods. Your merchant starts the game fully loaded with goods. Your goal is to deliver these goods to the port of your choice in order to earn doubloons.

Before, during, or after your movement, if your merchant is in a space adjacent to a port, you can sell all of your cargo at the indicated price (2 or 3 doubloons per goods cube) at the port.

The goods cubes are returned to the stock of the port of their color. It's never possible to sell a cargo in a port which does not accept the goods' color in question. After having sold their cargo, the merchant must immediately stock up on 3 goods' cubes of the color of the port in which it has done its delivery.

Selling and loading goods is an action. You can't load goods without selling first.

The merchant sells its cargo for 4 doubloons (2 goods worth 2 doubloons each).

This port (La Barbaria) buys the

goods for 2 doubloons each.

goods for 3 doubloons each.

The merchant delivers its two

goods for 4 doubloons, and loads up 3

If a player starts his turn without having his merchant in play (because it's been sunk), that player places it in a space adjacent to the port of their choice and loads it with 3 goods cubes of the corresponding color. It can then be played normally.

The role of the pirate is to steal goods cubes from the merchants, and then bury them as treasure on the beaches.

Before, during, or after its movement, an empty pirate can attack an adjacent opposing merchant. It steals one good cube from it, which is placed in its hold. The owner of the pirate ship earns 2 doubloons. If the merchant is now empty, it is sunk and returned to its owner. A goods cube held by a pirate ship is called a treasure. Attacking is an action.

Before, during, or after its movement, a pirate carrying a treasure can bury it on the beach space on which it is. The cube is returned to the stock of the port of its color. You win the number of doubloons indicated on the beach.

Burying a treasure is an action. Therefore you can't both attack and bury on the same turn.

If a player begins his turn without having his pirate ship in play (because it's been sunk or during the first turn of the game), the pirate places it on the distant sea area of his choice. It then undertakes its turn normally (movement and action), entering play through one of the adjacent spaces.

You can play as many fortune cards as you want on your turn. The effect of these cards is explained on each of them.

Once all of your movements have been resolved,you'll end your turn by doing this:

Remember,you can buy only a single development/victory card, per turn, even if you have enough doubloons to buy more than one.

Some of these cards allow players to make attacks on different types of ships or perform special actions. However, don't forget that you can only perform one action per ship, per turn unless stated specifically on a card.

Once this is done, your turn is over and play proceeds clockwise.

As soon as any player buys his victory card,you are in the final round. Check to see who has the black fleet card (the first player)

The final turn ends with the player immediately to his right, meaning that everybody plays the same number of turns.

The winner is the player who has bought his victory card.

If more than one player has achieved this, the richest among them wins.

For your first game, use the lower goal. Afterward, for slightly longer games (allowing you to use the full development card combinations more often), try going for a 20 doubloon victory!

Finally, if you're playing with a beginner or a younger player, you can give them the value 10 Victory card while you use the value 20 cards. 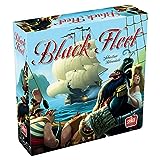