To be the first player to place 5 markers in a row either horizontally, vertically, or diagonally.

Remove the Bingo markers from their runners; discard the excess runner pieces.

One player is selected to be the Caller. The Caller's job is to spin the spinner to determine which Bingo letters and numbers are played.

The Caller will then place a marker on the tally card to record the letter and number called.

When a player has placed 5 markers in a row, either horizontally, vertically or diagonally, the player calls out "Bingo!"

When a player calls out "Bingo!", the Caller checks the player's card against the master tally card to make certain that the letters and numbers marked, have been called.

If the letters & numbers are correct the player who called "Bingo!" is the winner.

Other Versions of Playing Bingo 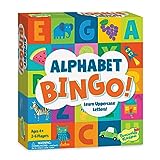