Bendominoes play just like regular dominoes but their innovative curved, design gives you much more control over the game. Full of challenges, Bendomino offers passionate games in which strategy, luck and good times are always combined.

Bendominoes are played in rounds. At the beginning of each round, place the 28 Bendominoes face down and mix them.

Stand the Bendominoes on their edges facing you so that other players cannot see the dots.

The remaining pieces represent the stock.

The player with the highest Bendomino double starts the game by placing the piece on the center of the table.

If no double was drawn, the highest Bendomino number should be played. (Example: 6/5)

Taking turns in a clockwise direction, each player tries to match a Bendomino by number to either end of the Bendomino chain.

To be accepted the new piece needs to match but also has to fit!

Example (1)- Open game position: The new Bendomino only needs to have a matching number, since it can be played 2 ways (to the right or left).

Example (2)- Closed game position: The new Bendomino needs to have a matching number and needs to turn in the proper direction. In this example, only a Bendomino turning to the right can be played.

Each Bendomino must be connected evenly with other pieces to ensure the accuracy of the game.

Players can decide to draw a Bendomino and pass their turn even if they have playable pieces.

Either end of the Bendomino game can be blocked when:

If both ends of the Bendomino chain are blocked, each player draws a Bendomino until the stock is empty.

A round ends when :

(The point total is the total number of dots on your remaining Bendominoes).

The winner of a round scores the dot points from all opponents' remaining Bendominoes.

The First player to score 100 points wins the game.

The object of All Five is to make all 4 ends of the Bendomino chain add up to multiples of five.

Each player DRAWs a number of pieces according to the basic rules. 2 pieces are randomly selected from the stock and placed on the table back-to-back, as shown below.

The player with the highest double begins.

Taking turns in a clockwise direction, players add a matching piece that numerically fits to one of the four ends.

The player with the highest score wins the round.

The first player to reach 200 points wins the game.

When players do not have a matching piece, they pass their turn instead of drawing. (All other basic rules apply).

In this version, each player DRAWS 7 pieces at the start of the game, So there is no stock. Players take turns and only use their individual pieces.

A team wins a round when one team member is declared the winner (see basic rules).

The winning team scores the dot points from the remaining Bendominoes of the losing team. 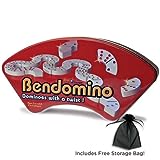 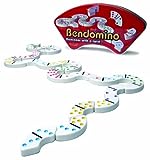 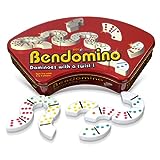