Have the most captured bugs at the end of the game.

The youngest player slides the ON/OFF switch to ON and shouts out one color-either red, blue, yellow or green.

As the bed shakes, all players use their tongs to pick up bugs of the announced color. Players hunt and capture all at the same time, so the play is fast and frantic. Players put their captured bugs in piles in front of them.

Frantically, the player to the left of the youngest player now shouts out a color and again all players try to capture bugs of that color.

Hunt and capture, as above, until all of the bugs, have been captured. The announcing of the next color-to-be-captured always passes to the player on the left and it only occurs after uncaptured bugs or wrongly-captured bugs are returned to the playing surface.

Important: During play, if the bedbugs do not jump up and down, the bed's cardboard playing surface may have to be flexed.

To do so, place your fingers on the underside of the bed frame and gently pop out the playing surface board.

Then bend it (printed side up), so its sides are higher than its middle section

If the bedbugs are too active and are jumping out of the bed, then flex the cardboard playing surface in the opposite direction so its middle section is higher than its sides. Reinsert it by inserting its tabs into the bed's slots.

Count up your captured bugs. Each player does the same. Whoever has captured the most bugs wins the game! 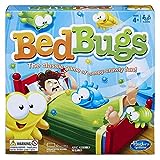 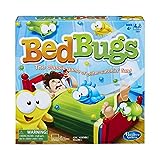