Place the scoring labels into the game base following the photograph on the front of the box.


Place the game base on the floor and decide how far away you want the tossing line to be. Use a strip of paper (or another object) to mark the tossing line. Each player takes 3 bags of the same color.

The game is played in two full rounds and both players will have a chance to go first.

One player tosses all three of their bean bags towards the game base. Add up the score and mark it down.

The next player now takes their turn and marks down their score.

The second player starts the round by tossing their bean bags and adding the new score to their previous score.

The other player now takes their turn and does the same.

The player with the highest score wins. In case of a tie, play one more round.

Divide into teams of equal numbers of players. Play as many rounds as there are players with teams alternating play and letting each player have a turn at being the first to toss. 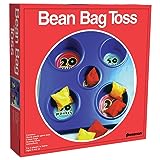