In Balloon Cup, the players compete in several short balloon flights (hops) to collect the colored cubes associated with each hop. When a player has collected enough cubes of a given color, he earns the trophy card for that color. Players may even trade 3 otherwise useless cubes for 1 they can use. The first player to earn 3 trophy cards is the winner!

There are trophies in the 5 balloon colors. The number on the balloon shows how many victory cubes of this color a player must have to claim the trophy.

Players place their balloon cards next to the balloon hop tiles, trying to collect victory cubes in the right colors so they can claim trophy cards. The first player to take 3 of the 5 trophy cards is the winner!

On a player's turn, he selects a card from his hand and places it face up next to the balloon hop tile of his choice. He may place the card on his side of the tile or on his opponent's side of the tile. Then, he draws the top-most card from the supply and adds it to his hand, ending his turn.

When the required number of cards have been placed on both sides of a balloon hop tile, the tile is scored and the victory cubes given to the winner.

Example: the number 2 balloon hop tile has 2 cards of the required colors on each side, so it is immediately scored.

After scoring a balloon hop tile, the players check to see if the winner has the required number of victory cubes in one or more colors.

Example: the yellow Imply card has been taken. Kevin has 4 green victory cubes and 3 yellow victory cubes. He puts all 7 of them in the box to claim the green trophy card.

Note: a player is not obligated to use the 3 for 1 trade when he first can. He may wait for a time that is best for him, but if he waits too long, he may give his opponent the chance to make a similar trade for a trophy card.

Not enough victory cubes in the bag

Near the end of the game, it can happen that there are not enough victory cubes in the bag for a player to fill a balloon hop tile. If this happens, the player removes the balloon hop tile from the game and play continues with fewer tiles.

The game ends immediately when a player takes a third trophy card. This player is the winner! 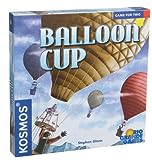