Balderdash, the hilarious bluffing game, offers plenty of opportunity to flex those bluffing muscles. Five outrageous and unbelievable but true questions and answers let you play the game that asks your friends to call your bluff.

Each game card lists People, Words, Initials, Movies and Laws that you've probably never heard of and aren't supposed to know anything about. But, that's where the fun really begins, because you get to make up an answer that's as silly or as serious as you want!

Now mix in the real answer and vote. You score points for guessing correctly and for bluffing the other players.

To make up answers that will bluff the other players.

Earn points for fooling other players into believing your bluff as well as for choosing the real answer.

In each round, the player directly to the DASHER's left advances their mover first, followed by the remaining players in clockwise order.

The first player to reach the "Finish" space on the board wins!

Note: it is a good idea to take one card from the box and read all of the clues along with their answers.

This will get the players familiar with the categories and with how the real answers appear.

Alternate turns being the DASHER. Roll the die, draw a card and read from the corresponding category question. Before turning it over and seeing the answer, the DASHER makes up an answer.

Now turn over the card to read and copy the real answer. Read both choices, in similar fashion, to the guessing player. 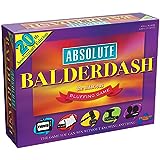