The object of the game is to be the first player to score 7 points. Laughing, crying, screaming, drinking, and being a jerk is not only accepted - it's encouraged!

Each player chooses a Player Identity Card (Gray) and places it face up in front of them. This identifies every player with a picture for voting purposes, for when you vote for your friends.

Each player collects a picture Voting Card (Black) for every person playing the game, including one for himself/herself that matches their player identity card.

Each player collects a Double Down card (Green).

The game ends when a player scores 7 points. This player wins. 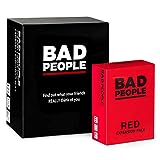