Each player oversees the building of his city-state. Temple, theater and oracle, a harbor with ships, vineyard with vintner, and many more must find space on the greek peninsula.

Players must move fast to get the best land for themselves while blocking their opponents from good building spots.

As building is expensive, players seek to save money by using the natural resources of the peninsula. Players also seek to organize their building in an order that allows building for free.

Depending again on the number of players, place 2, 3. or 4 shrines netxt to the game board tiles (see above).

Place the amphore to the side in a pile.

Each player chooses a color and places the player board of that color in his play area (the space before himself). Each player takes the 30 building tiles in his color.

Each player draws the top-most building from each of his 4 stacks and places them face up on the corresponding spaces on his player board.

Shuffle the 60 landscape cards and place them face down as a supply away from the middle of the table.

The winner is the first player:

The starting player begins and the players continue in clockwise order.

On a player's turn, he either draws 2 new buildings or builds 3 buildings from his player board.

The player draws 1 building from any of his building stacks and looks at it.

If he wants to spend the cost to build it, he pays the building cost an places it on the game board.

Otherwise, he places it on the corresponding space on his player board.

When a player chooses the draw action, he does it twice.

The player takes 1 building of his choice from his player board, places it on the game board, and pays the building cost.

When a player chooses the build action, he does it thrice.


After the player has drawn twice or built thrice, his turn ends.

Note: a player may not us the draw action and build action in the same turn.

When can a player draw landscape cards?

Example: the Sparta player chooses to build on his turn. First, he builds a fortress on the game board. Instead of further builds, he draws 2 landscape cards, adding them to his hand. Had he used the draw action and drawn a fortress, he could then draw only 1 landscape card.

If a player forsakes all draw/build actions he draws 3 landscape cards.

Where can a player build a building?

The cost of a building is shown in landscape symbols on the building tile itself and also on the player board.

The player pays the remaining cost with corresponding landscape cards from his hand. He places these cards face up on the discard stack.

The arrows on the player boards depict the free building order. To build for free:

Example: the Corinth player builds his tower directly adjacent to his fortress, paying nothing to build the tower as it is pointed to by the fortress on his player board.

In the following cases, players may not build for free:

Building for free: a player may build a street for free when he builds it directly adjacent to one of his streets.

Example: the player builds his first street on the space shown, reducing his cost by 2 mountains and 2 water. He pays 1 landscape card of his choice. Later in the game, he builds a second road adjacent to his first road for free.

What is a settlement?

A settlement is one or more connected buildings of the same player color. A player founds a new settlement when he builds a building that is not directly adjacent to any of his other buildings.

Example: the Thebes player already has 2 settlements. He builds a road on the space shown, founds a new settlement, and must pay an additional 2 landscape cards.

Notes: a player may connect two or more of his settlements with a building, & reducing later new settlement costs. Buildings connected only through a shrine are not in the same settlement.

Each building belongs to one of 7 groups (e. g. defense Oder shipping).

When a player builds buildings from one of his groups together, he earns amphore, which can be used to extend the length of his game turns at appropriate times.

Which buildings belong to a group?

On the player boards, the buildings of each group are shown together.

For example, quarry, fortress, and the two towers belong to the defense group.

When a player builds all buildings of a group such they are connected to each other on the game board, he earns a reward of 1 amphora, which he may use immediately or save in his play area until later.

Example: the Corinth player builds his quarry such that he now has all 4 buildings in the defense group connected. He takes an amphora from the supply, places it in his play area, and completes his normal turn.

When the supply of amphore is exhausted: The player draws a landscape card, placing it in his hand.

An amphora may also be used to draw 1 landscape card.

Reminder: a player may not draw or build after drawing a landscape card.

Note: a player may use as many amphore in a turn as he wants (and has), including those he earns during the turn.

When can the game board be expanded?

Then, he draws a game board tile from the stack and adds it to the game board. He may place the tile in any onentation he chooses.

Where may he place the board game tile?

A player wins the game, when he is the first player to either place all 30 of his buildings on the game board or to connect any two shrines with a string of his connected buildings.

The game ends immediately when a player wins.

When a player has built an entire group so that it is connected, he earns 1 amphora.

When a player draws the last tile from a building stack, he places a new game board tile. 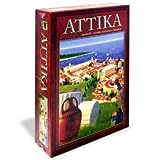