Towards the end of the 19th Century, sea cruises were incredibly 1 popular. This was reflected by the strong competition among the cruise operators and the crowds in the charter agencies - everybody wanting to secure the best luxury ships.

Each ship card can only be used on a single leg of a cruise on one of the four different seas. e.g. the ship card Rhea shows it can be chartered for either of the tree seas with its respected value.

On the board you can see five different classes indicated by the number of stars. The numbers on left side of each column shows the victory points.

In the ★★★★★-class you will achieve a greater number of vic tory points if your voyage occupies top position and zero points for the lowest ranking.

This always has 4 ships on offer at various prices (one free of charge).

As soon as one ship is chartered, the others will move clockwise in the direction of the arrows thus becoming "cheaper".

Each player charters ships in order to stage four different cruises. More suitable the ships are, better is the value of the cruises, which is then reflected in higher victory points.

Of course each player would try to beat the competition but the success depends upon making the right choice for selecting the right category for his voyage. The comparison of the values of the cruises in each category among the players builds an order of merit, which ultimately decides who wins.


Before Starting the Voyage..

The remaining money forms the bank.

Each player chooses a funnel emblem and receives the appropriate overview chart, as well as his four voyage record plaques.

If the game is being played with only 2 or 3 players, each player will receive 2 sets of voyage record plaques with the appropriate overview charts. In this case, each voyage must be conducted twice.

When there are 5 players, one set of voyage record plaques is left over, when there are 2 and 4 players, two sets are left. These will be used by Package Cruise Operators. Their value is fixed from the very beginning and is written on the record plaques, as shown in the picture below and are placed face up beside the game board.

These plaques do not belong to any player. As soon as the first voyage is conducted the respective record plaque from the Package Cruise Operator comes on the board.

By 5 players: (one remaining set of voya- ge record plaques left) write the following values on the plaques:

By 2 and 4 players: (two remaining sets of voyage record plaques left) write the following values on the plaques:

If Package Cruise Operators are involved in the game, their record plaques are placed on the game board after the first voyage is staged in a sea area.

Then the player's record plaque is placed on the game board in order of number of points.

If the points score is the same, the Package Cruise Operator remains in first place - this means only by having more points can a player force the package operator out of first place.

As the game goes on you can run out of money and should you need more money, the first thing you can do when it's your turn is to take a loan (note the order of play see page 3!) - provided that you have already conducted a voyage.

For every 1,000 marks you borrow, the value of your voyage is diminished by one point. The new value is noted on the voyage record plaque, which is then placed in appropriate merit order.

Example: In the ★★★★★-class, a Mediteiranean voyage with a value of 23 points occupies first place, followed by voyages with 19, 15 and II points. Oliver needs money and takes a loan against his Mediterranean cruise amounting to 8,000 marks.

The value of his voyage is thus reduced to 15 and it drops down to third place behind the other 15 point voyage. The new leader is now the 19point Mediterranean voyage.

Oliver's voyage drops from first to third place because he took out a loan for 8,000 marks.


In which class should the voyage be staged

In the case of the first voyage in a particular sea, you can freely choose in which class the voyage is to take place.

Note: The class which you may decide depends upon your willingness to take risks: You will earn more victory points in the ★★★★★-class but only if your voyage occupies a top positions.

However if you finish at near the bottom, you will have nothing to show.

Bear in mind that you can still win some victory points in the ★- class even for a voyage with ships that are not very suitable, but those in the top positions in this class will not reap as much reward for their efforts.

Place the voyage record plaque in the top field of the chosen class.

All subsequent voyages will be placed in order of their points value.

Note: No voyage will be placed in more than one category. Since the categories range from ★★★-class to ★-class and there are only four seas in play, one category will remain unoccupied in every game.

Example: Daisy has staged a Mediterranean voyage achieving a value of 19 points in the★★★★★-class.

Since this was the first Mediterranean voyage in this game, her record plaque occupies the top position.

Oliver is able to charter better ships and achieves 23 points for his Mediterranean voyage.

He therefore has more points than Daisy so his record plaque moves onto the top space, pushing Daisy's down into second place.

In the case of voyages of the equal points, those conducted later will be placed one field below the voyage(s) with the same number of points already on the game board.


Cast Off, let the game begin

The person who last has been onboard of a ship starts, the other players follow in a clockwise order.

When it's his turn a player can do three things. The order of play is fixed but only the third activity is compulsory. The first two are optional.

Since point 3 is compulsary it is explained first then the optional points 1 and 2.

Pick up a card from the Charter Agency and pay the appropriate charter fees to the bank. You can only charter one ship in your turn.

Note: Any ship on the »0 mark« space is for free and could be a good pickup, all other ships cost money.

Example: You have chartered a ship for 1,000 marks.

All cards on the more expensive spaces are advanced one space in a clockwise direction and the top card from the pack is used to fill the bottom left space (»3000 mark« space), which is freed up by this action.


Ships In My Hand

The maximum number of cards in your playing hand depends on the voyage you intend to conduct. After having played the required number of ships for a cruise, you are allowed to have a maximum of 2 cards left in your hand.

If a player wants to conduct a voyage, he has to play number of ship cards equal to the number of legs of the the respective voyage.

Allocate a ship to each section of the voyage, which you wish to conduct.

Note: The number of legs that make up each voyage is stated on your overview chart. The Baltic voyage only has 3. the Pacific voyage has 6 legs.

With 7 cards in your hand you are only able to conduct one voyage in the Atlantic or the Pacific and as far as the other two voyages arc concerned you would have too many cards left in your hand.

You may never throw away or exchange the cards you are holding in your playing hand. You can only dispose o f the cards by conducting a voyage.

Count the value of the ships played for the legs of your voyage. Any ship showing no points for its leg of the voyage conducted has been used as an emergency solution and does not obtain points. In such case there are no bonus points awarded.

Each ship may only be used on one single leg of a voyage and precisely one ship must be deployed on each leg of the voyage in question.

If the surplus ship is not suitable for any other leg of the voyage in the sea are question, it may only be played as an emergency solution.

Mail ships can sail any leg of any voyage and are always worth one point. Even though they are worth only one point, they can be very usefil to secure bonus points.

If all legs of a voyage are covered with appropriate ships, bonus points are awarded. The point values are to be found on the overview charts.

Write the number of points on the voyage record plaque in the top space.

Note: After establishing the number of points, the cards played are put to one side and have no further bearing on the game.

The loans will be paid out by the bank and cannot be repaid.

Note: Because this game isn't about money but fame and self-respect, you cannot pay back any loans. If your money runs out before the end of the first round you have played badly.

All you can do is rethink your strategy and try to persuade the other players to start the game again from the beginning!

After all six voyages in a single category have been staged, it is not possible to take any further loans against these voyages.

In other words: If all the fields have been filled in one category on the game board, there's no more money to be had in that particular category!


Changing the Ships in the Charter Agency

There are times when you don't like any of the ship on offer in the charter agency. Therefore you can remove them all, as the second action in your turn, provided you pay 2.000 marks to the bank to do so.

Note: You have to remove all of the ships on offer; you cannot remove some and leave other in the agency.

Once paid, take the top four cards from the draw pile and place them in order on the four fields of the Charter Agency (starting at 3,000 marks). If your finances allow it, you may repeat this action several times in one turn but you do have to pay 2,000 marks each time.

Once the draw pile is used up, the discard pile is shuffled and placed face down as a new pack.

The game is over when all voyage record plaques are on the game board. Given 4-6 players, each will stage 4 voyages. When there are 2 and 3 players each will conduct 8 voyages.

Add up the number of victory points printed on the game board to the left of your voyage record plaques.

Note: The number of points, which you have written on the voyage record plaques, are only significant with regard to the order in which the cards are placed on the game board and not for the victory points tally.

The player with the highest number of victory points is the winner.

If the scores are equal, the player with the more money takes precedence. 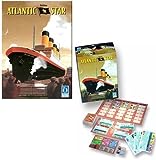