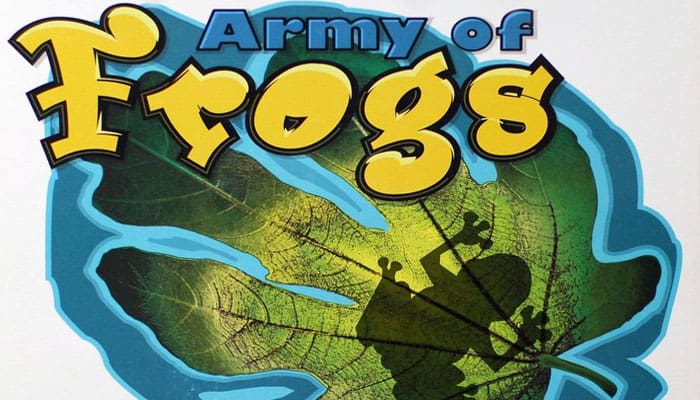 Army of Frogs is a game for 2-4 players. It uses differently colored hexagon-shaped Frog stones, which the players connect to build an island.

By adding new Frogs and moving existing ones, the aim is to be the first player to link all of the Frogs of your own color together (in any pattern) once seven or more of your Frogs are part of the island.

Each player chooses a color and places the corresponding colored indicator disc on the table in front of them so that it can be clearly seen by all players throughout the game.

This will help everyone to remember your color as your hand can contain other players' Frogs too.

Then all ten Frogs of each player's color are placed in the bag provided together with the other players' Frogs and mixed. If there are fewer than four players, any remaining Frogs are put aside and not used in that game.

Each player takes a 'hand' of two Frogs randomly from the bag and puts them next to their colored disc so that they too can be seen.

One player starts by placing either of the two Frogs in their hand in the center of the table and taking a replacement Frog from the bag.

Play then continues in a clockwise direction. During each turn, the players must undertake the following three actions in the order shown:

There are two special rules that control the structure of the island and ensure that the game is kept flowing, the one island rule a) and the string rule b):

Here, the only place the red Frog may be moved to is the space marked . If the red Frog is moved to any other position, it will create an illegal string with 3 or more single connections, marked in red below:

Exceptions to the String Rule

The string rule only applies to strings which end in a single Frog. If a string has multiple connections at both ends or if the Frogs form a loop,

the string can have any length.

The game ends as soon as one player's Frogs are all joined up, provided that at least seven of their Frogs form part of the island.

If eight, nine or ten Frogs of one color are part of the island, they must all be linked for that player to win the game.

The Frogs can be connected in a line or cluster of any shape.

Once you have placed all the Frogs in the bag, one player takes a Frog from the bag at random.

The player whose color has been picked starts the game. Return the Frog to the bag before picking your firsthand' of two Frogs.


When moving, can i jump with one frog first and then another?

No, you can only move one Frog in a single turn.

Can I Jump in any Direction?

No, as shown in the diagram on the right, you cannot jump across the edge or corner of a Frog stone.

You must always jump across the middle of one or more Frog stones,

Just like you might see a flock of seagulls, a school of fish or even a murder of crows, the collective noun for a group of frogs is an army!