All sorts of colorful sea creatures are swimming around the reef and gathering in schools. As soon as a jellyfish swims away, a starfish lands next to another starfish.

The larger the school, the more points it is worth when points are tallied at the end of the game. The highest score wins.

Position the game board - the reef - between the two players on the table. Turn all of the tiles so that the sea creatures are face down, mix them up, and place them next to the game board as your stockpile.

Take six tiles at random from the stockpile and place them face up next to the game board. This is your drafting pool.

A school is a group of contiguous tiles with the same color or the same animal type. Whichever player was most recently in the ocean will be the first player and take the first turn.

A turn consists of three phases:

Note: This step is skipped during the first turn, since there are no sea creatures on the reef yet.

Before the active player takes a sea creature from the drafting pool, he or she may move one sea creature on the reef.

The sea creature may be moved any number of spaces inside its row or column up to the point where it meets the next sea creature or the edge of the reef.

The active player chooses one sea creature from the drafting pool and places it on any empty space in the reef. That space may be next to another sea creature, but does not have to be.

Tip: To make it easier to get a quick overview, orient sea creatures of the same type in the same direction.

Example: "Place a sea creature onto the reef"

Before the end of his or her turn, the active player takes one sea creature from the stockpile and places it face up in the drafting pool. It is now the other player's turn.

Note: If there are no more tiles in the stockpile, you cannot take any from it. In that case, keep playing until the drafting pool is empty.

Both players keep taking turns until the reef is completely filled with all 36 sea creatures. Then perform the school assessment.

The score for each player is determined by the schools in the reef. During the school assessment, a sea creature can be a member of a school of a given color and of a given animal type at the same time.

Schools are contiguous groups of two or more sea creatures of the same animal type or color. They have to be side by side - diagonally adjacent tiles do not count.

This table shows you how many points you will earn for your schools:

Note: One tile by itself is not a school and, therefore, not worth any points. In the case of a tie, the winner is the player who went second.

Nina is playing with schools of the same animal type. She counts crabs (1 point), fish (6 points), jellyfish (1 point), seahorses(2x1 point), starfish (10 points), and turtles (1 point). This gives her 21 points, making her the winner!

The player with the most points is the winner

Do you want to play another round? This time, switch roles so the player who previously played with colors is now playing with animal types and vice versa. 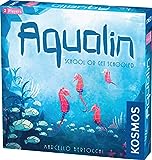