To win the most cards by facing-off with other players.

Sit in a circle, take one (1) of the decks from the box and shuffle thoroughly (5 or 6 times), split into two piles, and place within easy reach of all players. These are the Draw Piles.

The shuffler takes the first turn. He or she draws a card from either pile and quickly flips it face-up in front of themselves for all to see.

Notice that the card displays some text and a symbol. (If any Wild Cards are drawn in the next few steps, set them aside and draw again, we'll get to Wild Cards in #7).

One at a time, players continue drawing cards from either pile, in clockwise order, until the symbols on two players' cards match. If you draw a card and there is no match, the next player draws.

Note: You should only have one face-up card showing at a time. If it's your turn and you already have a card in play, flip the new card on top of your existing card. This pile of cards is your Play Pile.

When the symbols on two players' cards match, they must Face-Off with one another. This is the heart of the game. A Face-Off consists of giving a correct example of the person, place, or thing on your opponent's card, before they can do the same for your card.

The player who finishes blurting out a correct answer first wins the Face-Off. The winner takes the loser's top card and places it, face-down, in their separate Winning Pile. The winner's top card stays where it is.

The loser's Play Pile may now reveal a new top card. Watch out! A new Face-Off may now occur between the loser and any other player! Drawing must not continue until all possible Face-Offs have been played. Please note, play is structured so that

there can be only one Face-Off at a time, though there may be many in quick succession. This is called a Cascade.

Drawing continues with the next player in the clockwise drawing sequence. You may find it helpful to pass a small token around to indicate whose turn it is. A salt shaker or coin will do nicely.

A Face-Off can also be caused by a Wild Card. If you draw a Wild Card, place it face-up between the Draw Piles.

A Wild Card displays two different symbols. If those two symbols are in play (i.e. if they appear on the top of any two player's Play Piles) then those two players must Face-Off.

After a Wild Card is drawn

Going forward, all players must now look out for Face-Offs caused by same-symbol matches OR by a Wild Card. Only one Wild Card can be in play at a time. It will remain in play until covered by a new Wild Card. If you draw a Wild Card, you get to draw again, but only after all possible Face-Offs have been played.

When the Draw Piles are depleted, the person with the most cards in their Winning Pile wins the round.

You can play another round with the same deck, or use the other deck in the box to play with a whole new set of cards. Each deck is unique (except for the Wild Cards).

Flip your card quickly!Make sure that all players can see its face at the same time. You may not peek at your card, and you must keep your hands out of the way. Failure to do so will result in losing your turn. We suggest grasping the card from the far edge and quickly flipping it back toward yourself.

If there is a match on the table, but the matching players do not notice it, another player may prompt them to look more closely. Urgent murmuring usually does the trick. Poking can be helpful too. Remember, drawing cannot proceed until all possible Face-Offs have been played.

The group may determine whether the 'no repeat' rule is in effect for a round. It's fun to play either way, but it's harder when you are not allowed to repeat answers that have already been used.

If you opt for the 'no repeat' rule the following applies: Once an example is uttered, whether in play or in conversation, it may NOT be used to win a Face-Off during that round/sitting. The exception to this is when the same answer is appropriate for a different card.

A correct answer is usually common knowledge, can be real or fictional, current or historical, and is one that the group generally recognizes to be true.

For example, if you are trying to name a musician; you could give an example of a famous musician (Michael Jackson), a local musician (your Aunt Sally), or a commonly known fictional musician (The Pied Piper).

Any disagreements about the winner of a Face-Off, or the correctness of an answer, shall be decided by a group vote called by the loser. If necessary, you may use dictionaries, magazines, the internet, etc..., to help settle disputes.

For three-player games we suggest remov- ing two symbols from the deck This will increase the number of Face-Offs relative to the number of players and the number of cards. For example, remove all cards (including Wild Cards) that display the ♦ and/or O symbols, and play with the remaining deck. 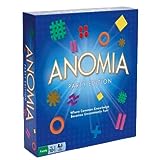