Not so long ago, in a galaxy not so far away, little green men, armed to the little white teeth, merrily vaporized one another in great blaster battles to see who gets the privilege to invade... EARTH!

MemoWars is a droll game for anyone, combining skill, tactics, and memory.

Eliminate the other players' cards, and be the last player with cards remaining in the galaxy. A player with no more cards is out of the game.

Each player chooses an Alien color, takes the nine cards of that color (2 Planets, 2 Scanners, 2 Double Blasters, 2 Blasters, and 1 Retro Blaster) and the matching Shooting Disc.


You can look at the cards you place. Cards cannot touch. No card can be more than half an inch (1 cm) from at least one other card.

The first player who finish to place all his cards takes the UFO. The UFO indicates whose turn it is. Once all the cards are placed, the battle can begin.

On your turn, reveal the card of your choice, leaving it in the same place.

Then pass the UFO to the player on your left.

Shooting Disc (1 per player): Use according to the shooting rules (see How to Shoot). Remember, when you shoot, your finger must remain in contact with the revealed card even after you throw the Disc.

Remove one card of your choice that is even partially covered by the Shooting Disc if any, before looking at it.

His card that shot and the Nano Minefield are both destroyed immediately. Discard both cards.

Hold your Shooting Disc between your thumb and index finger. Then place your pinky of the same hand on the face-up card, and toss the Shooting Disc.

Reveal a card of your choice that is covered even partially by your Shooting Disc if any. Eliminate it. Its owner retrieves it, keeping it face-down. You can always look at your eliminated cards and you must tell the other players how many cards you have left in play.

Note: Your pinky must remain in contact with the face-up card until the Shooting Disc comes to rest. If you don't or if you move the card, another player can oblige you to replay your shoot.

Remember: If you reveal a Nano Minefield with your shot, your face-up card is eliminated.

If you reveal a Retro Blaster (even yours) with your shot, its owner gets to shoot before it is eliminated.

When a player's last card is eliminated, he loses. The game ends as soon as only one player's cards remain in the galaxy.

He takes the UFO, becomes supreme commander, and has the immense honor of leading the conquest of Earth. 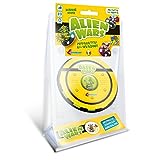