It all began with a simple map-a map said to lead to a legendary Minoan temple. Investigating the matter further, you've decided to set forth on the Aegean Sea. And it would appear you were not alone in this quest for fame...

These voyages and excavations will be costly. To fund them, you will need to gather resources from the surrounding islands and bring them back to the resource-poor island of Thera. Using landmarks to guide your way, follow your maps to unearth the forgotten temples, before time forgets them, and History forgets you.

Explore the islands surrounding Thera and gather the necessary resources to fund your excavations. Only by excavating temples will you gain the fame (points) needed to achieve victory. Keep an eye on your secret Goal cards too, for they could turn the tides and bring you victory.

The player with the most points at the end is the winner!

On your turn, you must do the following in order :

1. Play your Land tile - add your Land tile to the map by placing it next to another tile or to the Thera board, flush against one side. New tiles must always be connected orthogonally with at least one other tile.

Note: every Land tile has shipping routes on all 4 sides as well as 1 Terrain icon.

First place 1 resource ot the same color as the tile's Terrain icon, next to this icon (if there are no cubes of that color left, then this cube is not placed).

Then, you must choose a second resource (of any color) and places it on a different island on this just-placed tile.

In both cases, the required resources cubes are taken from the leftmost spaces on the Market board.

After placing a Land tile, Oliver places the green resource next to the Tree icon, then chooses the orange resource and places it on a different island on the tile he just placed.

3. Action Phase - before playing your first action, look at the rightmost visible number on your player board: this is the number of actions you can take this turn. Unless the action says otherwise, you may do any combination of the actions listed below.

Hint: use the Action tokens to keep track of your actions.

The number of actions you have will increase once you start excavating Temples.

Danielle has 4 actions this turn (she previously built a temple, revealing the 4).

Boats move from one dock to another. They may move via Shipping Route, or via Portage. A boat may move through another boat, but it may not stop at an occupied dock.

Empty Boat: if a boat is not carrying any resources, then it can move up to 2 times per Move action. These 2 moves must be continuous and may combine shipping route and portage; if you stop to perform a non-moving action, then that Move action ends.

Moving through an occupied dock: In some cases, you will want to move via Portage through a dock occupied by another boat. Doing so costs an extra movement (either in the form of an action, or the extra move from having an empty boat).


Load Boat (up To 3 Resources)

Important Rules For Locating A Temple

How To Meet The Requirements Of A Map Card

Notes: each tile is divided into 4 quadrants as indicated by the dotted lines.

Choose one of the 4 quadrants on one of the tiles of the island your boat is docked at as the excavation site for the temple.

Each Map card is surrounded on three sides by 1, 2, or 3 Terrain icons. Starting with Terrain icons above of the pictured temple on the Map card, prove that there are at least that many Terrain icons of that type on played tiles that are located above the excavation site.

'Above a temple' means away from the direction where the player is sitting. Above also means as far to the right or as far to the left as possible, so long as it's above the excavation site.

Continue proving that the excavation site is valid by showing how Terrain icons to the left, right, and below meet all the requirements of the Map card.

Example: Using the Map card shown above, we see a legally placed temple below: the Volcano Terrain icon on the board is above the line that is directly above the Temple (no matter how far to the left it is). The Tree icon is to the right of the temple, and the Mountain, below.

Buy Map Cards (at Thera Only)

With your boat at Thera, you may buy new Map cards. Each time you spend an action to Buy Map cards, you choose how many cards you buy, and for each card, its difficulty. You may have any number of Map cards in your hand.

Cost to buy Map cards with one action:


Consult The Oracle (once Per Turn)

Once per turn, you may request to draw a tile with a specific Terrain icon. Simply say out loud which icon you wish to have and flip Land tiles, one at a time, until you reveal one that shows the requested icon.

Keep the Land tile with the requested Terrain icon and put all other revealed tiles in a discard pile.

If you do not find a Land tile with the requested Terrain icon, keep the last revealed tile instead.

You can only ever have one Land tile in your hand at a time.

The following actions are free actions. They may be done any number of times and do not cost any actions.

Selling Resources (at Thera Only)

When your boat is docked at Thera, you may sell your loaded resources. One at a time, place each sold resource on the rightmost available space of that color on the Market board and take the corresponding amount of Drachmas from the bank.

Danielle is selling 2 Blue and 1 Gray resources this turn. She places those cubes on the circled spaces and takes (3+3+2) 8 Drachmas from the bank.

Unloading Resources (any Island Except Thera)

You may unload as many resources onto an island as you wish.

Take the resources off the boat and place them on the island where your boat is docked.

After resolving your actions, draw a tile (unless you drew one using the Consult the Oracle action). Regardless of where your tile came from, play then passes to the other player.

If the Land tile deck runs out at the end of a turn, shuffle the discarded pile to form a new pile of Land tiles.

Once a player has excavated their 6th temple, the game is nearing its end. Finish the round so that all players have played an equal number ot turns (i.e., the non-first player will be last to play), and then proceed to the final scoring. The player who scores the most points is the winner.

Ties are broken in favor of the player with the most Drachmas. If there is still a tie, then players rejoice in their shared victory.

For those looking to reduce the luck ot the draw with regards to Goal cards, do the tollowing during set up:

Whenever a player builds their 3ld and 5th temple, that player chooses 1 Goal card among the remaining lace up cards. This replaces the Draw 2, keep 1 depicted on the player boards. These Goal cards are never refilled. 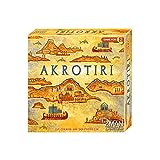