Use your creative wits to earn AdVersity Cash and be the first ad agency to hire 1 SpokesAnimal, 1 SpokesPerson, and me, Max Madison, (and I'm not cheap).

Typically, we don't like to use that term in the advertising world, but it seems to work here.

To get ready to play AdVersity, you only need to do TWO things:

If all the agencies vote unanimously for a product other than the one selected by the Advertiser, the Advertiser is penalized $200,000 for presenting a false, misleading ad.

After all, the integrity of the advertising industry MUST be maintained. (OK, even a professional like myself can't say that with a straight face).

After each agency has taken their first turn as Advertiser, each is dealt one more Ad Slogan card to replace the one they used in their first presentation. The next Product card is turned face up, and Round 2 begins with the agency to the left of the agency that began as the Advertiser.

Subsequent rounds are played the same way, and the ad game goes on until one agency has made enough money to win the game. (see "Winning the Game")

So you're just not finding that "perfect" Ad Slogan card to sell those products? NO PROBLEM! AdVersityTM is all about making you happy. (It's also been proven to make teeth 60% whiter, attract the opposite sex, and take grass stains out of pants).

Before each round starts, agencies are more than welcome to trade-in any or all of their Ad Slogan cards for new ones from the deck. There is a small fee of $100,000 to do this, but we think you'll find that the added enjoyment you receive will more than offset this nominal cost!

(Some restrictions apply. See store for details. Your results may vary. Member FDIC).

Advertising is all about image. And sometimes, to improve image, you need to hire a familiar face to put with a product. This game is one of those times.

At the end of each complete round, if your agency has enough cash to hire a SpokesCelebrity, you may do so. Simply pay the money to the bank, and take your SpokesCelebrity's card, place it in the plastic stand and display it proudly in front of your agency!

Be aware-hiring SpokesCelebrities can leave your agency strapped for cash. Which isn't a problem... unless you find yourself on the losing end of A Big Flop!

If you do not have the cash necessary to pay the $200,000 penalty, you must "release" a SpokesCelebrity for a lot less than you originally paid for them (see the Hiring prices and Release Values for SpokesCelebrities). Then you must build up enough money to buy them back.

You may choose any SpokesCelebrity you like, (of course your friends may judge you for your selection) but one of each type of celebrity must be purchased, in order, as listed below.

Be the first agency to hire 1 SpokesAnimal, 1 SpokesPerson and ME - The Ultimate Spokesperson, and you become the greatest advertising mogul the world has ever seen!

You'll be invited to all the best parties.

Meet all the best people. And your family and friends will hoist you on high to proclaim your advertising prowess to the world.

You must have all three SpokesCelebrities at the same time to win the game. If, at the end of the final round, there is more than one agency with enough money to hire Max Madison, in typical advertising fashion, hegoes to the highest bidder (a.k.a. the agency with the most cash).

In the rare event that the tied agencies have the same amount of cash, the agencies must have a "Play-Off" round. A new Product card is turned over and each agency is dealt a new Ad Slogan card (for a total of five in their hand).

Each of the tied agencies gets an additional turn, with the other agencies casting votes (as in regular game play) for each ad. At the end of the Play-Off the agency with the most cash is the winner and declared the "Advertising Mogul". 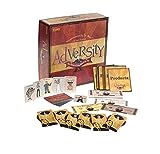