A Castle for All Seasons Character Cards

The player who plays the messenger takes 8 talers from the bank.

The player who plays the trader gets resources for himself and other players by placing one of his helpers next to one of the four carts or next to the rider.

Only after each cart has gotten a helper can the rider also get a helper.


Only one helper is allowed per cart or beside the rider. Each of these "trader's helpers" remains on the gameboard and "occupies" the respective kind of resource until he is displaced by another trader's helper (...or until the player needs his helper for a building).

A player may only displace an opponent's helper (including the courier's helper):

Example: if the stone, clay, wood, and sand carts are occupied, a player may decide whether to displace an opponent's helper from one of these carts, or to place his helper next to the silver courier (rider).

The original owner gets the displaced helper back into his personal stock.

After all trader cards have been executed in a round, every owner of a trader's helper gets resources. Each of these players gets as many pieces of each kind where he has a helper as shown by the printed symbols. Thus, the carts and the silver courier earn the players resources a maximum of once per round.

When a player earns resources with his trader's helper, he must immediately put one piece of each kind he gets on the defense tower.

(The entire image of the defense tower can be used, including the walls).

If there are not enough resources left, the tribute to the tower comes first. The remainder goes to the respective players.

The player who plays the bricklayer takes resources from the defense tower, may erect buildings, place helpers.

The player takes all resource pieces of one kind of from the defense tower.


Next, the player may erect up to 2 buildings (page 6) if he has the resources to pay for them. The bricklayer earns the player one taler from the bank for each resource piece used.

If the player erects at least one building, he may place up to 2 helpers on the board and earn victory points for them in the final scoring.

The player who plays the stonemason may buy resources from workers, erect buildings and, place helpers.

With the stonemason, a player can buy one piece of resource from the card of any player who plays a worker in that round. Each piece costs one taler.

If there is more than one stonemason in a round, each of them may, one after another, purchase one piece of resource from the played worker cards.

In Principle, the following apply:

The player who plays a worker gets resources and can erect buildings:


Although the worker gives the player only half as many victory points as the stonemason, it may make sense to build with the worker if no master builder is played in that round.

Example: if a player occupies the two gates with his helpers, he should erect towers for the final scoring.

The player who plays the master builder gets his previously played character cards back into his hand and immediately gets victory points for each building built in this round. 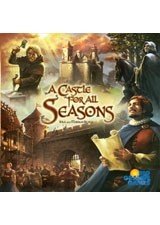