Choose to play as one of ten Marvel heroes, each with their own strengths and abilities, then join forces with your fellow players to take on six nefarious bosses!

Can your heroes fight their way through hordes of minions, goons and villains and defeat the mighty Thanos?

In 5-Minute Marvel, there are no turns. All players race against the clock to defeat the challenges that each boss throws at you. You're all in it together: either you co-operate as a team to complete the mission, or you are all defeated and must begin again. Good luck!

Select which hero you want to play as. Place the Hero Mat for your chosen hero in front of you so that the side marked INJURED is face-down. Grab the Hero Deck for your hero, shuffle it, and place it face down to the right of your Hero Mat.

Take the stack of Resource Cards, shuffle it, and divide it so that each player gets an equal number of cards. Place your hero's deck of Resource cards face down to the left of your Hero Mat.

Draw a starting hand from your Resource Deck. (Do not draw any cards from your Hero Deck yet-that comes later). The number of cards you draw depends on how many people are playing:

Note: During the game, you will always be refilling your hand to this minimum hand size every time you play or discard a card..

You'll need a timer that can be paused and restarted easily. Set the timer to 5 minutes and start it when you turn over the first Door Card in the Mission Deck to begin the mission.

For the best 5-Minute Marvel experience, download the free timer app at 5minutedungeon.com/5MM Available for Android and iOS devices.

Each Door Card has two or more resource symbols shown on it. The Door Card can be defeated with Resource Cards if the heroes play the matching symbols from their hands. The symbols are:

In addition, each Door Card has a type. Some Hero Cards and Special Abilities can instantly defeat Door Cards of a specific type without having to match the symbols. The types are:

Door Cards represent enemies that need to be defeated in order to reach the Boss. There are three ways to deal with Door Cards:

Crisis cards do not need to be defeated the way Door Cards do. Instead , they describe an action that must be performed immediately when they are turned over. Once the team has followed the instructions on the card, sweep it away and flip over the next card in the Mission Deck.

Anytime you have fewer cards in your hand than the minimum hand size, immediately draw new cards to refill your hand.

You may choose whether to draw each new card from your Resource or Hero Deck. Your Hero Deck contains your most powerful cards, but you only have 10 of them, so use them wisely!

Each hero has a side to their Hero Mat that says "INJURED". Some Crisis Cards may instruct you to flip your mat over or turn it to the injured side.

If your hero becomes injured, you may not use your hero's Special Ability until something allows you to flip it back (Some heroes have Special Abilities or Hero Cards that can do it, or a Crisis Card may instruct you to flip your mat back over).

As a last resort, heroes can choose to injure themselves to defeat any one Door Card by discarding their entire hand and flipping their mat to the injured side.

This will only defeat Door Cards, not Crisis Cards or bosses...though you can still injure yourself when facing a boss just to draw a new hand. Heroes cannot injure themselves if they are already injured or have no cards left to discard.

Once your team has defeated all the cards in the Mission Deck, you must still defeat the boss by matching the symbols printed on the Boss Mat. If you can defeat the boss before time runs out, you have completed the mission and you move on to the next boss

Note: There are no Hero Cards or Special Abilities that can instantly defeat a boss. The only way to defeat them is by matching their symbols.

When you need to reset for the next round, gather up all the cards and sort them back into piles (Hero Cards, Resource Cards, Door/Crisis Cards. Shuffle the decks to randomize the cards you'll get next round.

Players are free to switch heroes between missions if they choose. You can also add or remove players between missions, but if you do, don't forget to adjust the number of Door and Crisis Cards that are in the Mission Deck! 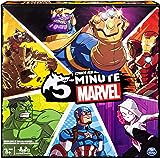