Break into 2 teams with an equal number of players on each team (or as close as you can get).

The players on the other team are no longer your friends. They are now your enemies.

Decide which team goes first. The player with the fewest Instagram* followers starts as the team guesser for the first round.

When a clue giver accidentally says one of the 4-Bidden Words, that team must take a Penalty Chip. Each Penalty Chip subtracts 1 point from your team's overall score.

Decide what type of game you're playing:

At the end of each 60-second round, add the number of cards won and subtract the number of penalty chips received to calculate your team's score. 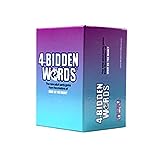