To start play, slide the card up until a thick black line appears. This reveals one clue to each team. Flip over the timer. Team 1 has 30 seconds to read its clue and ask Team 2 a question. Team 2 must answer the question to the best of its ability.

After Team 2 answers, Team 2 flips over the timer and asks Team 1 a question. Team 1 must answer to the best of its ability.

Teams continue to reveal one clue, then take turns asking questions. Once a clue is revealed, it stays revealed as additional clues appear. Teams answer to the best of their abilities, based upon all the information available to them.

Instead of asking a question, a team may try to solve the mystery. After one team announces its solution, it slides the card up until the fifth black line appears. Both teams lift up the flap marked "Solution" to reveal the solution.

If the guessing team is correct, it earns one point and places its scoring peg in the bottom hole of the five holes on its right.

If the guessing team is incorrect, the other team earns one point and places its scoring peg in the bottom of the five holes on its right.


Neither team announces a solution

If neither team guesses and all five of the clues are showing, flip over the timer. Both teams write a solution on the writing slates.

When time is up, they reveal their solutions. Each team that answers correctly scores a point (both teams can earn a point).

After scoring, remove the 30 Second Mysteries card from the stand and slide in another card.

The team with the fewest points goes first. If teams are tied, the team that went last on the previous mystery goes first.

The first team to score five points (move its peg to the top hole) wins the game. 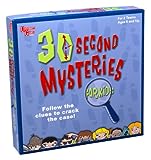