As warlords in 16th-century Japan, the players attempt to secure a position of dominance for their respective clans. The most successful Daimyo at the end of the game will become SHOGUN. â€¦ 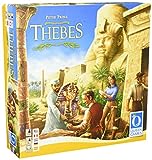