You are a dwarf and dwarves dig; it is a matter of pride and honor. But very few can join you among the ranks of the best. In a magical mine, pickaxe in hand, you race together or separately to claim the prestige your skills can earn.

Since its discovery, the King has been anxious to delve ever further and explore the magical properties in this mountain's incredibly gem-rich region. Answering the call, the best among the dwarves are ready to explore them. This is what Dwarves thrive on -- an absolute Gem Rush!

You alone, or with up to six of your friends, can play Gem Rush as competing or cooperating dwarves in a magical mine. In Gem Rush, players take control of dwarves building a magical gem mine. The rooms in the mine are used to obtain gems, and then those gems are used to construct new rooms and score points.

The rules are nearly the same for both modes, so rather than describing them separately, this rulebook gives a combined explanation of both modes, with special notes when a rule applies to only one mode. â€¦

The Gems of Gem Rush

Veins of this rubbery material are often found running underneath ley lines. It has powerful conductive properties, and is often used to convey power between various locations.

Fire rubies are produced when the earth cracks and bleeds. These lustrous gemstones possess a singular fire, which can be tapped by illuminating them from just the right angle. They are the primary source of heat in most arcane machinery.

This dark mineral is the residue left behind when magic is destroyed. It symbolizes decay, but also the cycle of change and renewal, and serves as an important catalyst in many alchemical reactions. â€¦ 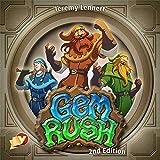